One of the most common questions I hear when teaching concealed carry is, “What is brandishing?”, and I think it’s very important for anyone who carries a gun to know what the law says about brandishing. Before we discuss some cases and examples in Virginia, let’s look at how the law defines brandishing. Virginia State Code § 18.2-282 defines it as

On April 1, 2016, I was driving in Spotsylvania County when a black Mustang with Georgia plates passed me at a high rate of speed as I was taking a right turn at an intersection. It was a Friday afternoon, so there was heavy traffic, as a result, about 90 seconds after I had been cut off, I found myself stopped at a traffic light directly behind that same Mustang. For reasons still unknown, the man driving the car proceeded to stick a full size Glock pistol out of the driver’s side window, point it in my direction, and waive it around for a few seconds while he stuck his head out the window. I immediately called 911 and drew my concealed carry pistol.

At this point, a number of things were running through my mind, including the all important question: Was my life in imminent danger? The Mustang had an absolutely blacked out rear windshield, so it was impossible to determine whether or not there were other occupants in the vehicle. My instincts told me he was the only occupant in the vehicle, and I turned out to be right. Because I trusted my instincts, I did not fire at the man initially, nor did I even display my handgun to him. I simply kept my gun in my hand out of his view. All the while, I am articulating to the 911 operator exactly what is transpiring, second by second. My flight or fight response kicked in, and the fight was on. 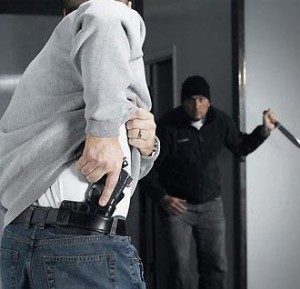 After an uneventful 15 seconds following the gun out the window, we were both moving again, this time up to the intersection of Mine Road and Jefferson Davis Highway. I kept my distance, about 50 yards. The traffic light was red, and [the Mustang] was the third car in line in the left hand turning lane. After he came to a stop, my heart skipped a beat as I watched his car door swing open. At this point, I was absolutely sure there was about to be a shoot out, and I was extremely concerned with the amount of innocent bystanders in harms way. I immediately put my car into reverse, positioned my vehicle angled away from him, took off my seat belt, put it in park, and put my left hand on the door handle. I needed to get out of my car as soon as possible, back peddle to the rear of my car in order to gain some cover from incoming fire. He got out of his car, and looked back at me for a second, seemingly with empty hands, and proceeded to walk to the car in front of him. It appeared as if he was attempting to speak with the driver of that vehicle for reasons still unknown. The man proceeded to get back into his car after about 30 seconds.

Thankfully, I never had to exit my vehicle, or fire at this man. In hindsight, this man is lucky to be alive. There were a plethora of reasons I did not immediately start firing at the man at the first sight of his gun. Had I been at a different point in my life, I may have opened fire immediately upon seeing his firearm. The fact remains that it would have been extremely difficult for him to get an accurate shot off in my direction, because of the positioning of his vehicle’s B and C pillars, and my vehicle’s A pillar, coupled with the fact that I directly behind his vehicle and still about 10 yards away. In hindsight, I have questioned my decision not to fire at the man immediately due to the fact had my instincts been wrong, and he actually had other occupants in the vehicle who were armed as well, I may have been outgunned. It is instinctual for people being shot at to take cover immediately, but, is that how it really would have gone down? Thankfully, no one will ever know.

In this instance, it would not have been considered brandishing had I actually displayed my firearm to this man after he had [displayed his] in a threatening manner; however, this would have allowed him to argue in court that I showed my gun first (since there were no other witnesses). If the man could accurately describe my firearm (which might be a generic looking “black pistol”), that would presumably create enough reasonable doubt in his favor. In other words, he would simply argue that he felt his life was in imminent danger because I displayed a firearm [first], even though it would be a total lie, it would still create reasonable doubt.

Whether or not to shoot boils down to circumstances. I happened to be on my way home from work, and was by myself in the car, but, had other occupants been in my car, would circumstances have changed? Maybe, maybe not. Also, another point to consider is that if you have to think, “Do I have to do this?” you probably don’t. At the end of the day, you’ll most likely be arrested, charged with murder, and it will ultimately be up to a jury of your peers to decide, “Was it necessary?” If [the Jury] cannot absolutely answer YES to that question, then you’re at least guilty of the imperfect self defense of manslaughter, and you could very well spend 10 years in prison. When faced with a potentially deadly encounter, be sure that you have the proper training, the right mindset, and attitude necessary to safely carry a pistol, and take someone’s life [with that pistol] if necessary. On the other hand, be prepared to have a gun pointed in your direction, and show as much restraint as possible before committing to taking the shot that could not only end their life, but yours as well.

Whether you wish to obtain a Concealed Handgun Permit, want to develop your skills and build confidence, or have questions about our security services,
we can help.